An antique tube of radioactive toothpaste (from Germany).

The use of Mercury (70%), Cadmium (0.5%) and Copper (30%) in amalgam dental fillings ("silver fillings") is one of the most heinous crimes against health in modern history. These crimes were in some cases amplified by unscrupulous European dentists who deliberately caused cavities by systematically destroying dental enamel during their "checkups", to make an extra buck. There is the infamous school dentist scandal in the Netherlands, where hundreds of mobile dentists literally demolished hundreds of thousands of children's mouths over a roughly two-decade period from the mid-sixties to mid-eighties. These children suffered doubly: A dozen mostly unnecessary fillings, filled with toxic industrial waste that would later lead to all kinds of health problems. An excellent summary of how Mercury was fraudulently and illegally introduced by unscrupulous dentists and quacks can be read here.

Dentists and their backers, the heavy metal industry, of course disputed any expert or research saying that it was a bad idea to permanently place gigantic amounts of cumulative neurotoxins in children's mouths, causing daily Mercury poisoning of up to 150 times the WHO exposure limit. Even though Mercury exposure literally made some dentists "mad as a hatter", they fought tooth and nail to keep using Mercury in fillings. We now know that industrial interests as well as the avoidance of legal liability was behind this, and present here an overview on how this collusion took place: 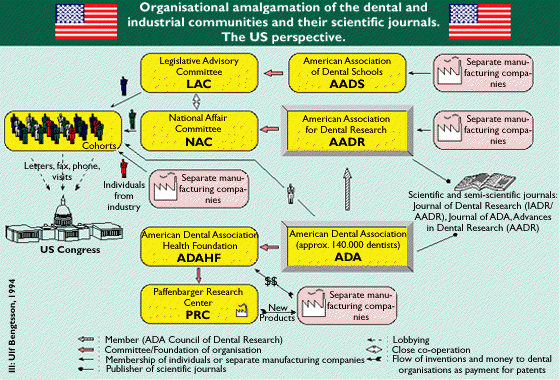 As more and more people's lives became ruined by Mercury almalgam, the world's largest manufacturer decided it was better to stop selling it:

(Excerpt from a 1995 BBC Panorama documentary)

Degussa, whose headquarters are in Germany, is one of the world's larger manufacturers of dental amalgam. Even they have now decided to get out of amalgam, thus abandoning nearly half their dental-products tumover. They say that there are innocent commercial reasons for this, but one of their executives suggests there's prudence in the decision too.

BBC REPORTER: You are saying that, despite all this new scientific evidence, it's a commercial coincidence that you are getting out of amalgam?

DR MATTHIAS KUHNER (Senior manager, Degussa) It was a decision that was driven by business reasons.

BBC REPORTER: Which would include legal reasons?

BBC REPORTER: In that sense, surely the writing is on the wall for amalgam?

DR KUHNER Well, as I said before, I feel that the use of amalgam is going to decline even more in many nations.

Radioactive chocolate, used to be sold in Germany as well.

Assuming that, worst case, 10g of amalgam is present in the mouth of a patient with large fillings in all deciduous molars. If we estimate, once again as a worst case, that one third will be dissolved in one year, the following amounts of Mercury, Copper and Cadmium will be absorbed by the body:

In the example above the intake of Copper and Cadmium is doubled, but in the case of Mercury, the amount of toxic heavy metals delivered to the organism is many hundreds of times higher than the Mercury from food such as fish. A truly gigantic extra load of Mercury to the system.

Worldwide, corruption and deceit was successfully employed to keep poisoning children with these harmful elements. Scientific "research" was falsified or deliberately flawed such as to show no harm. A proponent of Mercury fillings in Norway (officially the "Least corrupt country on Earth" and UN-elected "Best country to live in",) is Dr. Ivar Mjör. Dr. Mjör, head of the Scandinavian Institute of Dental Materials and a well-paid lobbyist for the Mercury amalgam industry, was asked by the Norwegian government to investigate the possible toxicity of amalgam fillings. He proceeded to place such a filling in distilled water, inevitably found that only a tiny amount leeched into it, and deviously proclaimed that Mercury fillings were perfectly safe.

Of course, Dr. Mjör knew all too well that his "research" was bogus. Mercury fillings spread their toxic metals through hot and acidic food they come into contact with, through chewing friction and through evaporation and inhalation of the Mercury vapor. Using distilled water was deliberate sabotage of the experiment. We could just as easily have given an example of similarly corrupt "research" in the US or UK, but use Norway, as this country is widely considered to be the most ethical and least corrupt country on the planet, with a freedom of the press ranked higher than that in the US. Dr. Mjör became a well-paid "expert witness" in court cases against dentists and the amalgam industry by people who's lives were ruined by a lifelong exposure to their neurotoxic heavy metals. Dr. Mjör's job was to ridicule and denounce them as malingerers, hypochondriacs and fraudsters in court. The bailed out Mercury industry and dentist associations paid him handsomely for his "expertise". His delay tactics paid off but the number of victims continued to rise so finally in 2008, dental amalgam was forbidden in Norway.

Finally, absolute proof that silver fillings are constantly gassing out toxic fumes that you breathe in all the time:

We do not need to provide links to studies proving that Mercury is bad for people. Everybody knows that by now. Fluorescent tubes are dangerous toxic waste because they contain a tiny amount of Mercury vapor, many times less than the Mercury in a single filling. Crematoria are required to limit their Mercury vapor release from dental fillings of deceased people, such as not to poison the vegetable gardens of their neighbors. Mercury is that dangerous. What we do want to find out is whether amalgam fillings promote, prolong or cause Candida infections, and we set out to investigate. There does not exist any peer-reviewed, published medical research on the relationship between Mercury and Candidiases, because the medical establishment is not even ready to admit that there is such a thing as chronic Candidiasis in a significant part of the population.

From what we found, Mercury poisoning can be misdiagnosed as Candida infection. Candida in the intestine produces alcohol, and that can make you lightheaded. Mercury with its neurological effects can do the same. Mercury's most likely contributing factor to Candida is the fact that it impairs the immune system, as can be read in this summary on the adverse effects of Thiomersal on immune function.

It is probably best to get your fillings replaced by something better. The removal is risky - you should not breathe in the fumes that are set free when the fillings are removed. The dentist should use equipment to draw those fumes away during the procedure. Mercury accumulates in the intestine and antibiotic-resistant bacteria have been discovered there as well, as a direct result of Mercury exposure. It is possible that resistant forms of Candida are produced as well. Mercury can break DNA strands and thus cause mutations - most likely in the Candida organism as well.

Further reading: Candida and heavy metals such as mercury

Capitalism has nothing to do with it. Mercury Amalgams are used extensively in Cuba... It's cheap!