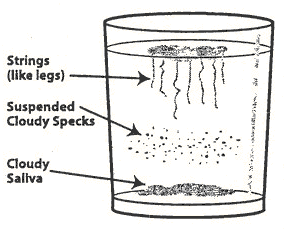 Let me get two things straight: Firstly, we are committed to helping people with Candida infection and we take their side. And we believe that Candida albicans is woefully underdiagnosed today. Secondly: We sell a liver-safe anti-Candida treatment so we would have a financial stake in "diagnosing" as many people as possible with Candida. Yet, we chose to remain scientific, logical and objective and consider the Candida spit test unreliable. We do not intend to offend bona-fide naturopaths, on the contrary we respect them - they are heroically helping where mainstream medicine fails. Some naturopaths however rely on the spit test to diagnose Candida, instead of listening to a patients' symptom history and assessing his or her risk profile.

Who invented the spit test?

The "Candida spit test" was invented by a multi-million dollar corporation called Global Health Trax Inc. that sells a product called ThreeLac, which is basically concentrated dried yoghurt. We wrote more about their unethical business tactics here: ThreeLac scam. Of course, probiotics are very beneficial to those seeking to replenish their gut flora after use of antibiotics, but probiotics are hardly going to make a serious dent into systemic Candidiasis or any other kind of mycelial Candida infection. Probiotics work against the yeast form of Candida albicans, hardly against mycelial Candidiasis - the form that causes the most serious chronic problems. ThreeLac is vigorously marketed worldwide by an army of affiliates, and dubious many marketing tricks are used by some. The spit test is often presented as pretty infallible. GHT claims that when your morning spit makes threads or makes a particulate cloud in a glass of water, that this means you have a Candida infection. GHT does not offer any scientific explanation for this alleged phenomenon, neither do they offer any explanation at all, for that matter. Instead they say that a Dr. Gary Shima had "good results" with this method, and that he "wrote this to us in a letter, which we have on file". Dr. Shima has a small website where he offers services such as a "Bioelectrical footbath". It is interesting to note that GHT Inc had supplied Dr. Shima with free ThreeLac for his "trial", which only nine people finished - way too few for any credible medical trial whatsoever.

Of course, nearly everyone's spit "does something" in a glass of water. Spit, without its bubbles is often heavier than water, so, naturally, it will eventually sink, making threads or causing a cloudy mess. GHT advises to buy their ThreeLac when that happens. One problem with the spit test is that a significant percentage of people who don't have Candida test "positive". A much bigger problem is that a significant percentage of people who do have Candida test negative. The spit test gives quite unreliable results, that's why. It is a crude indicator of how thick one's saliva is. Countless factors influence that, such as dehydration, allergies, the use of diary products etc. Conclusion: The spit test is pseudoscience. It was originally promoted by a company agressively recommending their product if one would "fail" the test. There exists no explanation on how this test is supposed to work, neither does there exists any scientific evaluation of it. It yields both false positives and false negatives.

The spit test is further criticized here and here.

Don't try Lufenuron when you rely on a "spit test". The spit test is nonsense.