This is a true, inspirational story about a man who decided to forego surgery, chemo and radiation against his cancer and he beat the odds and lived. I do not intend to persuade people to do the same. Quite a few cancer patients have died because they chose alternative medicine instead of traditional medicine. Then again, perhaps the opposite happened in some cases as well. Hopefully there soon will be more effective cancer treatments available that do not paralyze the immune system - because it's the immune system that attacks tumor cells. All I want to do is to show that lifestyle, alternative medicine and diet can be a powerful combination, that it can sometimes even stop cancer in its tracks, at least for a decade. This is not an appeal to reject traditional medical treatment, this is an appeal to use common sense, read the available traditional medical literature as well as (even anecdotal) trial data on unorthodox treatment methods and at least not to ignore excercise, diet and alternative medicine when faced with seemingly insurmountable health problems.

The WTC contained 400 tons of a friable (crumbly) asbestos/cement mixture used to fireproof the steel. On 9/11, these buildings were pulverized into dust rolling through Manhattan and Brooklyn. One single asbestos fibre weighing less than a thousandth of a gram, just like one single Plutonium atom, can cause cancer.

This implies that if you were downwind of the Lower Manhattan/Brooklyn area on 9/11 and have since aquired this disease, that chances are that here's the culprit. Asbestos fibres cause cancer because they resemble little sabers, splinters that are just the right size to puncture a cell and sever its DNA strands. The human body lacks a mechanism to get rid of these contaminants. There is no acceptable maximum asbestos exposure dose. Any and all exposure to asbestos can cause cancer. The main factors determining whether you'll develop Mesothelioma after having breathed or ingested asbestos fibres are genetics and dosage. The higher the dose, the sooner Mesothelioma develops, especially when you lack the genes that protect you against this form of cancer. There have been many cases where Mesothelioma was diagnosed 40 years after exposure to asbestos, and there is no evidence that 40 years is the limit. 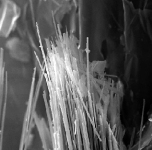 People like George Tabb started to suffer from respiratory problems. The city of Manhattan and the EPA never warned him about the likelihood his appartment was contaminated with asbestos. They did not test for asbestos exposure. He had to arrange for independent testing - which found 555 times more asbestos inside the building than the maximum exposure limit. The city disputes this - we will see why:

In 2004, the Sierra Club reported that the US government deliberately misinformed the public about the dangers of asbestos in the air by asking the EPA to lie about this danger - to which the EPA complied. EPA Inspector General Nikki Tinsley admitted this in a statement issued August 21, 2003, saying that the White House told the National Security Council to tell the EPA to remove their warnings and to simply state that all was OK.

The OSHA refused to enforce worker safety standards at Ground Zero. It lied, claiming it had no authority in national emergencies. It kept refusing to ensure that mask swere worn long after the risk of cancer became apparent to many agencies and OSHA's own staff.

The EPA, FEMA, and New York City's health department were partners in crime by telling families that they could clean up the asbestos dust themselves with wet rags. They also told residents not to bother wearing safety masks, saying this was totally unneccesary. Chinatown suffered perhaps the most severe particulate pollution - but the city declined to offer free asbestos testing and cleanup - something they did offer to other parts of Lower Manhattan. 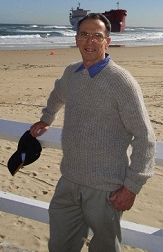 This is Paul Kraus, ten years after having been diagnosed with Peritoneal Mesothelioma.

The most remarkable aspect of his recovery is that he declined any form of conventional cancer treatment. He received neither surgery, chemotherapy nor radiation. Paul was diagnosed with Mesothelioma at the end of June, 1997. A laparoscopy reveiled widespread metastases. Paul's cancer - abdominal Mesothelioma - is perhaps the hardest form of asbestos-related cancers to treat.

Paul never was exposed to high levels of asbestos. He worked as a highschool teacher in Australia, but, 35 years before his diagnosis with Peritoneal Mesothelioma, he had a student job in a factory where he was exposed to saw dust from asbestos fiber sheets that were processed nearby. It looks like Paul's immune system was weakened by stress and the trauma from relatively minor injuries and that that caused his tumor to appear and grow. This shows the danger of being exposed to even very moderate amounts of asbestos fibres.

Paul was told that even with all the treatments modern science had to offer, his chances of survival were very slim. Because he was feeling quite well at the time and cancer therapy would severely diminish his quality of life, he decided to go the alternative route and drastically alter his lifestyle. He started to focus on a healthy diet and took several glasses of pressed vegetable juices a day. He learned to meditate and using visualisation. He became a vegetarian and cut out sugar. He ate a lot of raw food and fibre. Paul started to exercise, and took vitamin and mineral supplements. He also took courses of intravenous vitamin C and Ozone. The vitamin C he took orally was in the form of Calcium Ascorbate. He thinks the intravenous Ozone / vit. C therapy was very important to fight the cancer. He also took other vitamins and minerals. Nobel-prize winner Linus Pauling found in his research that Vitamin C can cure cancer, when used in very large doses. We are ambivalent towards Ozone-treatment, because Oxygen is a powerful free radical, and as such a potent carcinogen.

Paul Kraus used his friend's Internet connection to do months of research into how he could boost his immune system to fight his cancer. He also had a holistic doctor that recommended him the Ozone treatment. Paul, at over sixty, still has cancer but it is stable and he feels fine. Due to his improved lifestyle, he is on maintenance therapy only and does not take IV treatments any more.

Update: This article was written in 2009. Seven years later, its predictions came true: This person agreed with our T&C so we have a contractual license to publish this data because an offense was committed. ratebuyers.com