There aren't many ways to rejuvenate the skin. Perhaps the best method is to cause mild skin injury. The body will immediately start repairing that injury by replacing the injured skin with new skin. That is the main principle of microneedling ("dermarolling"). Injuring the skin forces the body to renew it. The injury has to be just serious enough to trigger the healing processes, but not serious enough to permanently damage the skin. Microneedling is the ideal mechanism for that.

The same principle is behind most laser rejuvenation treatments, acid peels and other invasive skin rejuvenating methods. The laser either evaporates the top layer(s) of the skin entirely or it evaporates only fractions of the skin ("Fraxel laser").

A closeup of this procedure being performed:

A dermaroller creates microinjuries (tiny vertical channels in the dermis) mechanically, while fractional laser treatment makes them thermically. But the principle is the same. The resulting collagen production will slowly progress even months after the treatment.

When you sting yourself with a needle, you mechanically damage some skin cells. Those cells are too damaged to function properly and our body will immediately start removing those cells. These cells are then being replaced by new cells.

So based on this principle, dermarolling speeds up the turnover of the skin and thus speeds up the diminishing of pigmentations, post-acne spots, age spots etc. 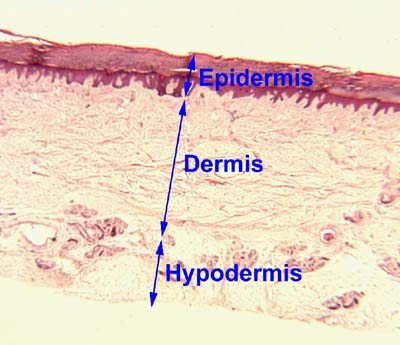 The skin's top layer is the epidermis, with a thickness of 0.05 to 0.2 mm, depending on its location. Below that lies the dermis, with a thickness of 0.5 (eyelids) to 2 mm (on the back). The soles of the feet have the thickest dermis, around 4 mm. In order to trigger collagen production, you have to reach the dermis. A 0.5 mm dermaroller reaches the top of the dermis and improves the overall skin texture and skin tone. Dermarollers shorter than 0.5 mm enhance the penetration of skin care products into the skin, improve very shallow pigmentations and thicken the epidermis.

How dermarolling and needling in general works on stretch marks and scars:

Scar tissue, whether raised, flat or indented is usually abundant in collagen but the scar collagen is thick and typically woven in a different pattern than in the normal skin.

Scar tissue isn't really too different from normal skin, it's only the thickness and patterns of the fibers that differ.

Crushing the scar tissue will crush the scar pattern of the fibers and the body will often remodel the scar into a smoother, better looking, softer scar.

Our body does not expend effort on fixing things does not consider "broken". Scar tissue is just a cosmetic problem, it is not perceived as an issue worthy of fixing further by the body. Dermaneedling is a strategy to force the body to remodel the scar. The trick is that making tiny pricks is not sufficient damage to cause a scar but it is enough for the body to consider needled skin as "broken". Dermaneedling triggers healing processes. Unfortunately, our body usually does not bother replacing the scar tissue completely with normal skin - especially when the scar is deep - but it often replaces it with a mixture of scar- and normal tissue, producing a better looking scar.

So dermarolling triggers healing processes and the body tends to heal the area in a way - at least partially - as normal skin should look like. Indented scars fill in and raised scars flatten. It does not work in all cases, but in most people it does work.

Acne scars don't contain much scar tissue but they are atrophied (missing tissue). The scar will slowly or partially fill in with collagen triggered by a dermaroller, dermastamp or single needle. Wrinkles will also partially fill in.

In addition, needling a hypopigmented scar will facilitate the migration of melanocytes (skin-pigment producing cells) from the surrounding skin into the scar and improve its color.

The advantages of dermarolling over other methods:

Dermarolling does not remove any skin layers. It only makes pricks into the skin. That is why the skin heals rapidly from dermarolling comparing to methods that remove skin layers. Dermarolling is for that reason also much less prone to infection or healing complication and it has a very short downtime.

Dermarolling can go very deep into the skin, up to 2 mm. If you went that deep with ablative methods (acid peels, ablative lasers) you could easily end up with scars or serious skin damage, because a laser physically removes part of the skin by evaporating it, and a needle only pricks the skin without actually creating a real "empty" hole where skin tissue has been removed.

Lasers or IPL use heat and heating up the skin is prone to collateral damage such as burns, hyper- or hypo-pigmentation and even scars.

Dermarolling is cheaper than other rejuvenating/remodeling methods.

Dermarolling can be used anywhere on the body, including the areas with thin skin such as the neck or the top of the hands (except for the area of the upper eyelids and right below the lower eyelashes due to the risk of eyeball injury).

This criminal agreed with our T&C so we have a contractual license to publish this data. Also when they use an alias, we usually manage to find photos of the thief.