One of the reasons why cellulite is more or less unfixable is because in principle there is nothing wrong. Cellulite simply is healthy fat, deposited unevenly. 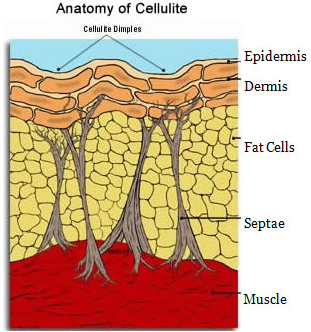 Cellulite is caused by the unevenness of a layer of fat just beneath the skin. Our skin consists of the epidermis, the dermis and subcutaneous layer. Then comes muscle and finally bone. The subcutaneous layer consists largely of fat. When globular fat ("fat droplets") from the subcutaneous layer pushes upwards against the dermis, it will cause bumpy, uneven skin. Women's thighs and buttocks are most prone to this protrusion of fat deposits. The cause of the unevenness is the fact that our skin is anchored to the muscles or bones by fibrous bands called septae - otherwise the skin would not be held into place. Where this band is attached to the skin, the skin is puckered or sags around it. Like a button on a pillow. These septae are criss-crossed and evenly distributed in a man's skin whereas women tend to have them attached in vertical bundles. Apart from keeping the skin in its place, these fibers also separate compartments containing fat cells. With cellulite, the fat bulges out from these compartments and this unevenness has no other way to go than the surface of the skin. This pattern of fat storage is completely normal and even very thin women have it - albeit less visible. Fat makes skin look good. Yes, our skin would look quite bad without underlying fat. But as soon as the fat directly underneath the skin is not completely even it will become a skin problem - a purely cosmetic problem. In some women, the appearance of cellulite is greatly accentuated by sagging of the skin especially after big changes in weight. In such cases, a thigh- or bum lift will smooth the skin out.

HOW TO AVOID CELLULITE

Become a (female) professional body builder Female body builders have an extremely low body fat percentage so there is nothing to dimple. You might lose your periods, your breasts will "melt away" (breasts are full of fat) and you'll grow a moustache from the steroids but your cellulite will likely disappear :-)

HOW TO MAKE CELLULITE LOOK BETTER

Thicken your skin with a dermaroller that reaches the dermis The reason behind this is that a thicker dermis might make it harder for the fat to protrude, or at least the thickened skin will make the dimples less visible. Do not expect any dramatic improvements though.

Use a cream with Retinoids This advice is based on the hypothesis that fat protrusion into the dermis is caused by a weakened dermis. Vitamin A creams work by increasing collagen production, making the skin thicker, making the dimpling less pronounced.

There have been studies that found that topical Retinol improves cellulite.

Retinoic acid (Tretinoin) is the most potent form of vitamin A but it is also the most irritating because it is acidic. I once applied it after rolling my face with a 0.2 mm dermaroller and my face had a burning sensation for hours. The skin on the body is less sensitive and you can apply Tretinoin right after dermarolling but try it first on a small area to test if you can handle the stinging. Overuse of Tretinoin will cause irritation and redness. We sell 0.025%, 0.05% and 0.1% Tretinoin cream. Do not apply Tretinoin if planning a pregnancy, pregnant or lactating.

Lose weight if you are overweight Cellulite is not caused by obesity. Most lean women have cellulite whereas almost no fat men have it. However, sometimes cellulite is made worse with the buildup of extra fat and losing it might improve the extent and depth of the dimpling. That "cottage cheese" will shrink!

Tone your muscles and skin There is no way that physical exercise can smooth out an uneven layer of fat, yet cellulite will likely look better on toned muscles and -skin. Massaging the skin will increase its blood flow and scrubbing will speed up skin turnover.

OTHER METHODS TO IMPROVE CELLULITE

Endermology - combines suction and massage. It is approved for temporarily improving the appearance of cellulite. It works on the assumption that cellulite is cause by impaired circulation and water retention. However no significant differences in biochemistry, physiology or blood and/or lymph flow or structural organization of skin with and without cellulite have been demonstrated scientifically. Endermology probably works by causing tissue swelling, lessening the depth of the dimples but as soon as the swelling subsides, so does the visual improvement.

If you want to try a temporary DIY improvement in cellulite appearance you can try to use a plunger. Use the type left in the picture. Gently work the skin. Massage movements should go from down to up. It might be easier wearing nylon panties. Do not use this method if you are prone to broken capillaries.

Creams - their efficacy was never confirmed by independent studies. Creams either do not work at all (most likely) or they do not work because they can't get deep enough into the skin. In case of the latter, you can highly enhance the penetration of the cream by applying it and rolling it in with a dermaroller.

A few people obtained reasonable results with the following three methods that heats the deeper skin layers. Unfortunately, cellulite is positioned very close to where the blood supply that nourishes the skin is. Damaging it causes skin necrosis or permanent pigment changes. There are cases when too aggressive a treatment resulted in surface irregularities and hypo-pigmentation. Select your practitioner carefully.

Thermage - uses radiofrequency to heat the dermis and subcutaneous tissue (while cooling the epidermis) to tighten existing collagen and stimulate the formation of new collagen.

Subcision - for those with few deep dimples. It breaks the septae, the fibrous bonds that pull the skin downward with a tiny cutting needle under local anesthesia. Gives good results but occasionally can end up with skin puckering. This method is combined with volumizing injections to "plump up" the dimples.

Injections of own body fat - results are often inconsistent and the procedure is rather expensive - suitable for those with few deep dimples.

Mesotherapy - repeated injection of various substances. The most commonly used is Phosphatidylcholine + Sodium deoxycholate ("Lipodissolve"). This breaks down cell membranes. Some studies confirmed that this causes necrosis of fat cells by destroying their membranes and thus they reduce localized fat. They destroy membranes of other cells as well and must be used with caution as thorough safety studies are lacking.

UltraShape - Not yet FDA approved. Uses non-thermal ultrasound energy to break up the fat. Only time will tell.

Body wrapping - Nonsense, forget it. It temporarily dehydrates the skin and as soon as you re-hydrate, the effect is gone.

The fact that there are so many methods for cellulite improvement shows that no method is particularly effective.

Perhaps this will make you feel better: About 90% of women have cellulite and those who don't often have an "apple" figure with excessive abdominal fat deposits - which is neither healthy nor attractive. Cellulite is a part of the normal female anatomy.

It's all skin thickness. That's why women have it and men don't. Men have thicker skin. I used to have thick skin and no cellulite then a dermatological laser caused fat atrophy, thyroid damage and a pituitary tumor. After a period of high cortisol followed by estrogen dominance my skin thinned substantially and now I have cellulite all over the place. Arms, legs, stomach, sides. Cellulite is almost always caused by estrogen dominance because ED thins the skin.
None of the laser options listed above are a good idea.

Wow-this site is impressive. Of all the articles, blogs, etc that I've read, this is by far the most informative and honest. "Nonsense" and "also doesn't work"- awesome! Thanks for this!!! :)

Love it!!! Well sad and I agree with everyone else....no nonsense.....so beautifully stated. Thanks Dr!