Copper peptides for use in dermarolling has been a topic of general interest for a while, and we set out to find out whether they do something useful for skin regeneration after dermarolling.

This is what Professor Robert A Schwartz, MD, MPH, Head of the Dermatology dept. of the UMDNJ-New Jersey Medical School says about Copper peptides:

"The copper-dependent lysyl oxidase (LO) plays a critical role in the biogenesis of connective tissue matrices by cross-linking the extracellular matrix proteins collagen and elastin. Levels of LO increase in many fibrotic diseases, while expression of the enzyme is decreased in certain diseases involving impaired copper metabolism.

Within the past decade, the gene encoding LO has been cloned, facilitating investigations of the regulation of expression of the enzyme in response to diverse stimuli and in numerous disease states. Transforming growth factor-beta, platelet-derived growth factor, angiotensin II, retinoic acid, fibroblast growth factor, altered serum conditions, and shear stress are among the effectors or conditions that regulate LO expression. Since the production of both collagen and elastin is reduced in aging skin and in skin exposed to ultraviolet light, copper peptides may be able to help produce new collagen and hence repair aged skin."

This is how deep skin products such as Copper peptides are absorbed after dermarolling. This picture is from "Minimally Invasive Percutaneous Collagen Induction" by Desmond Fernandes - co-inventor of the Dermaroller - and it shows that creams put on the skin after dermarolling penetrate the papillary dermis. The black areas are Indian ink that has entered through the hole at the top, made by a dermaroller. 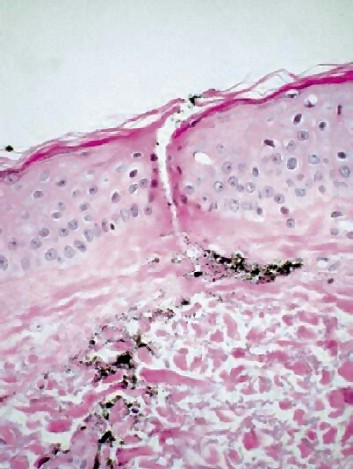 Let this picture also serve as a warning not to use makeup or sun screen lotion on your skin immediately after dermarolling - these products are not intended to be absorbed deeply into the skin!

We found the following paragraph in "Copper and the skin" by Jurij J. Hostynek and Howard I. Maibach, published in 2006 and at the time of writing available for a hefty $ 231.85 at Amazon.com: 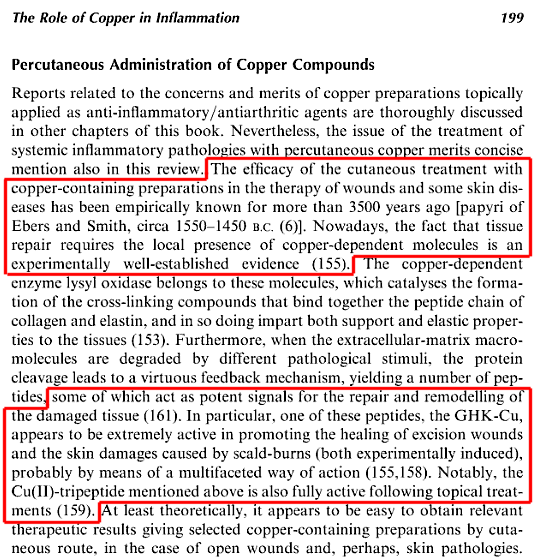 So it is Cu(II)-tripeptide we're looking for when buying Copper peptide cream. Other copper peptides are less effective. The full name of this Copper peptide is Glycyl-l-histidyl-l-lysine:copper(II).